Three important things to know about depression are: it is common, it hurts and it is eminently treatable. Depressive experiences, such as the sadness that follows a disappointment, or the mourning of a lost loved one, are a part of everyone’s life. The more severe and persistent forms of depression, major depression and dysthymia, are remarkably common, afflicting 19 million Americans each year and are manifested by symptoms such as lowered mood, apathy, and disturbances in appetite, sleep, energy and concentration. In its most extreme form, depression is a condition so exquisitely painful that suicide may too easily be seen as a tempting way to escape the torment.

Modern psychiatry emphasizes the use of psychotropic medications like Prozac, Lexapro and Zoloft in the treatment of depression, and these agents have undeniable efficacy in reducing the intensity of depressive symptoms. Given the effectiveness of antidepressant medications, one may reasonably question the value and necessity of psychoanalytic approaches to the treatment of depression. Psychoanalytically informed psychotherapists may respond to such queries by pointing out that medications often fail to entirely resolve depressive symptomatology, and that not everyone can comfortably tolerate their side effects.

Psychoanalysts will also emphasize their conviction that depression has at its core underlying psychological meaning, and that, even where medication has been effective, addressing the central psychological underpinnings of depression requires an analytic approach. In our current culture of quick fixes and 15-minute check-ups at the internist, it is a sad fact that depression often ends up being over medicated, while its inner meanings and psychological significance are left unaddressed. Psychodynamic psychotherapy is often necessary to provide for the delineation and understanding of the profound role psychic factors play in the causation of depression and to facilitate whatever psychological work and growth may be necessary to overcome these factors. Such therapy not only helps to resolve depressive episodes, but also helps patients live freer, more vibrant lives.

Psychoanalysts have discovered that there are no simple formulas for understanding what a particular depressive episode may represent for any given person and consider each episode of depression to contain its own unique matrix of meanings. Through the years, analysts have delineated numerous formulations to help them understand the origins of their depressed patients’ inner pain. A few simplified summaries of some of these conceptualizations are offered here.

Freud’s early ideas about depression emphasized the notion that depression may represent anger turned inward, a concept that is still found to have great relevance today.  Clinicians continue to be struck by patients who respond to situations in which they have been harmed or mistreated not with the expected rage but, instead, with depression. It is as if these patients are incapable of allowing themselves to feel and to outwardly direct their anger and, instead, turn it upon themselves, leading to a self-deprecating depressed state.

Later on, Freud also recognized that many depressed patients possess an overly harsh inner voice of moral authority or “super-ego” which attacks and punishes the 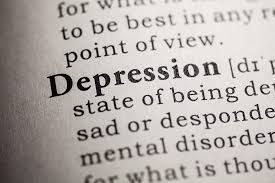 conscious self for its perceived transgressions, (often relating to unacceptable sexual or aggressive feelings) thereby producing the guilt so characteristically seen in these patients. Following from Freud’s original findings, many practitioners have continued to emphasize the importance of exploring angry and aggressive feelings and the inner conflicts they trigger when working with depressed patients.

Numerous other psychoanalytic theories about depression have emerged in the six decades since Freud’s death. More recent generations of psychodynamic clinicians emphasize the centrality of what they refer to as “deficits” in the development of depressive episodes. We can understand this concept by recognizing that the adult requires many psychological tools for successful functioning in the world, some of which may fail to develop fully, typically due to environmental factors that have interfered with psycho- logical maturation. Any psychological capacity that fails to develop normally can be considered to represent a “deficit” that will necessarily restrict in some way that person’s ability to function freely and effectively in the world. Such “deficits” in healthy functioning can often be seen to be causal factors in the genesis of depressive episodes and can especially be connected to chronic, lifelong depressions. Deficits in many different aspects of psychological functioning have been linked to depression including the capacities for trust, separation, self-esteem, social related-ness, frustration tolerance and healthy entitlement.

Psychodynamic therapy helps patients with deficit-related depressions in two ways: by helping them to more thoroughly understand their areas of psychic underdevelopment and its origins and, more importantly, by providing a safe and meaningful relational experience within which psychic growth that had previously been thwarted can resume.

One psychoanalytic model that considers the importance of deficits is self-psychology, a branch of psychoanalysis first developed by Heinz Kohut. This school of thought focuses on the notion of the “self”, that part of the personality which allows for a cohesive sense of selfhood, well-being and self-esteem. Like any other part of the psyche, a healthy self may or may not develop. Self-psychology emphasizes the constant supply of affirming relational experiences that are required both to develop and to sustain a healthy “self.” When working with depressed patients, self-psychologists emphasize what is often readily apparent to patients who become depressed after failing an exam, missing a promotion or being disappointed in a relationship that depressive episodes are frequently triggered when a vulnerable self is hurt by some frustration or injurious experience. The self- psychology approach underscores the strengthening power of the therapist’s sustained empathic understanding of the experiences of the depressed patient which, over time, helps to make the patient less susceptible to depressive episodes in reaction to life’s frustrations and disappointments.

Another related conceptualization of depression comes from the British theorists Fairbairn, Guntrip and Winnicott. According to this model, we should consider that depressive symptoms, especially when characterized by feelings of emptiness, apathy, meaninglessness and futility, may represent a massive withdrawal of what Winnicott refers to as the “true self” from relational experience with the world. These patients, who often appear perfectly happy and successful to the outside world, may secretly feel that they merely go through the motions of life. They experience their interactions with people as being devoid of any significant “true” emotional involvement. They may seek to avoid interpersonal interactions or attempt to keep these engagements as superficial as possible. They often feel that they are “playacting” their way through life, without even knowing what it would mean to be “real.” Clinicians often discover with such patients that traumatic experiences early in life have caused them, in a sense, to turn away from the world of people and to withdraw within themselves. Consequently there is disruption in the development of the inner tools necessary for comfortable emotional connectedness in relationships.

According to these theorists, relational experiences are a necessary source of energy for the psyche, as vital for its healthy functioning as food and oxygen are to the body. It follows that withdrawal from emotionally infused relational experiences has a destructive effect on the psyche, resulting in an impoverished empty existence that is often characterized by chronic depressive symptoms. Psychodynamic therapy offers an opportunity to help these patients become more aware of their intense, but often unconscious, relational fears and the ways in which their profound reactions to these fears restrict their lives. At the same time, such treatment offers the safe experiential milieu within which patients may begin to allow themselves to engage in more authentic and emotionally charged relational experiences.

The psychoanalytic approach to the treatment of depression remains useful and vital, even in the age of Prozac. Many therapists believe that depressive episodes may, in fact, serve as a valuable signal to the sufferer that something is amiss in their interior emotional life. As elaborated by Emmy Gut in her book Productive and Unproductive Depression, such an episode challenges the depressed patient with doing the “work of depression,” creating the space both to process the depression in all of its complexity and to address its causes in whatever ways may be needed.

Psychoanalytic therapy provides invaluable assistance to depressed patients as they confront these challenges and, in the process of helping patients overcome their depression, such treatment can also stimulate new and necessary growth. When a depressive episode is used productively in this manner, we are liable to find, as Winnicott observed, that “a person may come out of a depression stronger, wiser and more stable than before he or she went into it.”

Michael A. Brog, MD, is a faculty member of the St. Louis Psychoanalytic Institute, and former director of The Advanced Psychodynamic Psychotherapy Program. He is also assistant clinical professor, Department of Psychiatry and Human Behavior at St. Louis University School of Medicine, and he is in private practice.